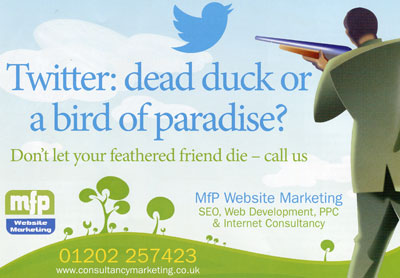 Twitter is an increasingly integral part of the new seo world

The world of internet marketing has changed quite drastically in the past 12 months and Twitter is an increasingly integral part of the new world – so what has changed and why?
The way things used to work, page ranking in search engines like Google used to be based on links and keywords.

The more links the better your rankings within Google so the SEO industry was based on buying and selling links.

The use of keywords in your website content improved the chances of it being found in searches, so the more keywords and the more often they were used the better the visibility within search engines. That resulted in content studded with keywords often written by someone with little grasp of English – so not only annoying, but also nonsense!
Something had to change.

Google still wants to present useful and informative content to its users and in order to do this it is using the two newest recruits to the Google Algorithm – Panda and Penguin.
Their job is to weed out websites with vast quantities of meaningless links and badly-written content. Panda seeks out and penalises low quality links and overuse of keywords while Penguin’s mission is to seek out and penalise thin content.

The job of the SEO industry is now to keep Panda and Penguin happy.
To do that you need original and regularly updated content written by someone Google can trace through Google authorship and new and naturally-achieved links.

The advent of social media has allowed users to claim the internet from the webmasters making the web far more interactive than prescriptive. If you are using Twitter effectively you will generate naturally occurring links from people, often without them realising that they’ve done it.
Twitter also offers a platform to create relationships and interactions that don’t rely on search engines to be effective.

Social marketing can be an awkward concept for those of us with a more formal business background, but we do need to embrace it, relax and learn to have some fun with it.
I have created a blog post at www.consultancymarketing.co.uk/blog/twitter that talks in more detail about the merits of Twitter and how it may improve your Google ranking.